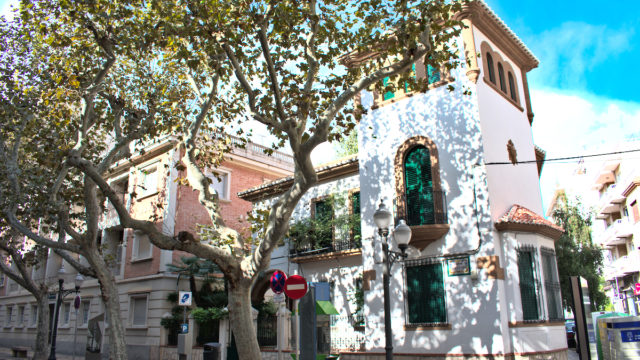 The center of Denia is one of the most pleasant places that can be frequented in it, both for visitors or tourists, as well as for those who live in Denia all year round.

Its well-kept streets and old buildings, the diversity of shops, restaurants (one of the strengths of Denia is its gastronomy), as well as squares and historical monuments give it a special charm.

The center of Denia has been developing in the southern part of the Dénia castle, towards the renowned Calle Marqués de Campo, although in recent years the area of ​​Calle Loreto (also considered the center of Dénia) has gained much prominence in the city, the Baix la Mar neighborhood, as well as La Vía Street, whose name was given to it because the Dénia train track was located in that place 40 years ago.

Calle Marqués de Campo in Denia (named above) is the main street of the city. It is the most commercial street and where there are groups of people walking, going from one end to the other, from the Glorieta del País Valencià to the port area where the beginning of the Explanada Cervantes is.

Center of Denia to enjoy the gastronomy

The center of Denia stands out for the variety of restaurants, especially those that offer typical gastronomy of the area, such as tapas, fish, seafood, rice … Most of these restaurants are traditional restaurants, with history, or even centenary like the well-known Casa Bodega Benjamín located very close to the Glorieta del País Valencià, although Loreto street is also a concentration street for restaurants in the area.

It is not surprising that this city, representative of the entire Marina Alta, was named in 2015 Denia Creative City of Gastronomy in UNESCO, since in the area there is a great awareness to preserve traditional gastronomy, without renouncing that. , to new culinary techniques and advances in gastronomy.

Although the center of Denia is an ideal place to discover typical dishes of the area, there are also very good restaurants in the area of ​​Las Marinas, Las Rotas … And if we want to enjoy international cuisine we can also find options, in the center or according to we are moving away from this one.
In Dénia we can find restaurants with international cuisine, Italian, German, French, Japanese, Hindu, Oriental … There is a variety for all audiences.

Returning to the center of Denia, Calle Marqués de Campo is a wide street with rows of trees at various ends that give a green and natural touch to the street in the spring and summer times, and an autumn-winter atmosphere when the The street is covered in dry brown and orange leaves that fall from the trees or even on us. Children love to play with these sheets.

Until last year (2020), Calle Marqués de Campo was a traffic street for vehicles towards the port, but it has been decided that the street will become pedestrian, which has caused controversy among merchants in the area and citizens of Denia, since it is believed that people will stop attending these shops and businesses because they cannot park on the same street, although the truth is that we rarely find parking to park in this street due to its influx of people.

Streets that belong to the center of Denia:

Other streets with which Calle Marques de Campo connects are also considered part of the center and are the following:

Pare Pere Street: is the one that connects at one end with the Glorieta del País Valencià with Calle Marqués de Campo.

Ramón y Cajal Street: the first street that passes by one side of the Glorieta del País Valencià and becomes pedestrian until it reaches Cavallers street in the direction of the Dénia City Council.

Cop Street: pedestrian street after the Glorienta del País Valencià and that goes up to the Plaza de la Constitución, the beach of the Dénia Town Hall.

Diana Street: it crosses Marqués de Campo Street, this intersection is known in Dénia as “els quatre cantóns” which in Spanish means “the four corners” a traditional place as a meeting point.

Calle Carlos Sentí: it crosses Calle Marqués de Campo connecting Calle la Mar (also considered downtown), passing through the main entrance to the Municipal Market of Dénia, along Calle Diana, and Paseo Saladar until the beginning of the Montgó Mountain.

Carrer del Temple Sant Telm also crosses Marques de Campo street, located almost reaching the Port of Dénia. In it we find some restaurants, fashion stores and at one end it connects with the Dénia Castle Wall.

Sandunga Street, this street is the last before reaching the Port of Dénia. It has recently been turned into a pedestrian street, which we hope will benefit the restaurants on it. Going through this street is a pleasant walk that will take us to Plaza San José.